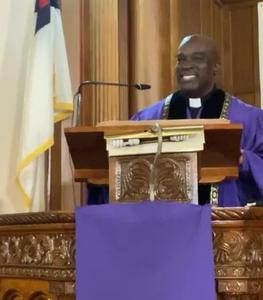 ​Pastor Aaron M. Best is the youngest of three. He is a graduate of Housatonic Community College with an Associates of Science Degree in Small Business Management; he completed his undergraduate studies at the University of Bridgeport with a Bachelor of Science in Business; and then went on to complete his graduate studies at Regent University School of Divinity earning a Master of Divinity Degree with a Concentration in Church & Ministry. Currently, Pastor Best is pursuing a Doctorate of Ministry Degree at New York Theological Seminary.

Pastor Best began his discipleship at Friendship Baptist Church of Stratford, where he joined in January 2003 and was baptized in April of that same year, under the leadership of Rev. Dr. Johnny Gamble, Founder and Pastor. On August 31, 2008, he delivered his initial sermon at Friendship Baptist Church of Stratford, becoming a licensed minister. Through hard work and diligent study, he was then ordained into the ministry on October 14, 2012. Pastor Best was a faithful disciple at Friendship, serving in many capacities, until he was called out to plant a new chapter in ministry.

On May 24, 2015, being obedient to God, Pastor Best left his home church, after 13 years and as God willed; and with much prayer, faithfulness, and trust in God, on June 14, 2015 Pastor Best delivered his first sermon as Founding and Senior Pastor of St. Matthew Baptist Church launching its first worship service.

Under his leadership at St. Matthew Baptist Church has been commissioned by the national organization of Healing Communities USA as a Station of Hope for returning citizens returning to the Bridgeport community after incarceration. Also, St. Matthew Baptist Church has become a member church of the Interdenominational Ministerial Alliance of Greater Bridgeport and Vicinity, The Council of Churches of Greater Bridgeport, and The Connecticut State Missionary Baptist Convention, and The National Baptist Convention, USA, Inc.

Pastor Best is the President of St. Matthew Community Development Corp. and President of Aaron Best Consulting, LLC., a business management company. He serves Vice President of Moderator's Division of the Connecticut State Missionary Baptist Convention, he also sits on the Board of Directors and is Chairman of Congregation Relations Committee for The Council of Church of Greater Bridgeport; Advisory Board Member of The Mayor’s Initiative on Reentry Affairs, and a former member of the Interdenominational Ministerial Alliance of Greater Bridgeport and Vicinity. Pastor Best was the 2018 recipient of the Healing Communities, USA “Excellence Service Award” for reentry affairs in Washington, DC. His favorite scripture is Psalm 27 and his favorite hymn is “We Come This Far by Faith.”​